Bennachie and its Hinterland - A Landscape of Community

Bennachie and its environs form the focus for a long-term research strategy involving the University of Aberdeen and the local communities of the area. The project - now in its sixth year - is known as Bennachie Landscapes and is co-ordinated by the Bailies of Bennachie (a long-standing conservation group attached to Bennachie) and staff attached to the University of Aberdeen. Centrally-sourced funding and local dedication has produced research resulting in many new insights concerning the social and landscape history of the area. This has led to numerous outputs in international, national and local publications. The research is co-produced by local community members and academic staff. Local schools have been an integral part of this co-production process, recognising their landscape as an exceptionally rich educational resource. This utilisation of ‘landscape as resource’ is only the most recent manifestation of a relationship linking Bennachie with its surrounding countryside (its hinterland). This relationship can be shown to have existed from early historic times and, arguably, for much longer prior to that. The north-east corner of Bennachie has been found to be particularly richly emdowed with a wide range of data attesting to this long-enduring community. 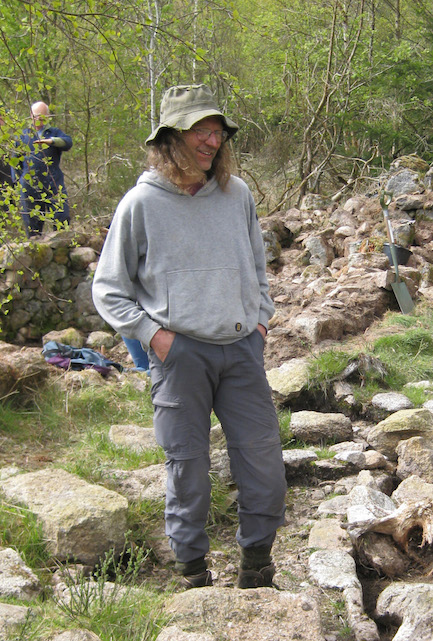 Sometime between 1185 and 1219 David Audri was granted rights of pasture on both sides of the River Urie at Resthivet as far as his beasts could reach by day and return by nightfall (Stringer, 1985, 223). Such recourse to common pasture across the area was still being recorded five hundred years later in the witness statements at the High Court (1738) as evidence in the case of the ‘peat wars’ on Bennachie. Part of the Earl of Aberdeens’ ‘witness memorial’ ran: “The Hill of Bennachie being a forrest and consequently belonging to the Crown and the heretors on all sides have right to it and are provided of peats and turf fuel thereof and which hill is very extensive and had different names of old on the different corners of it that it now goes under the name of Bennachie and many lands lying several miles distant are served of fewall from it.” (GD33/16) Note his contention of lands lying several miles distant using its resources.

In 1260 Gocelin de Baliol secured the right to access water from the River Urie and run it, by lade, to power his mill at Insch (Dowden, 1903, 154). Quite where this monumental example of water technology ran is still a mystery. But that different locations could work together within a unified management plan can be widely established. Research into the land management of the large adjoining lordship of Huntly has shown how diverse ecological resources were managed in tandem to create a unified and sustainable agrarian design (Shepherd, 2011). Studies by the community as part of the Bennachie Landscapes project is beginning to tease out these management strategies around Bennachie. Research carried out by the teachers and pupils of Oyne school have demonstrated how one historical 13th century estate, granted to Henry de Boiville between 1185 and 1219, can still be traced on the ground (Teachers & Pupils of Oyne School, 2013, 63-84).

Two plans held in the Special Collections at the University of Aberdeen show the disposition of the lands east of Bennachie c.1769 (MS 3528/9 and MS 3528/10). The compact areas of ‘infield’ land surrounding the major farming units gradually give way to the less intensive cultivation of ‘outfields’ nearer to Bennachie. No fixed enclosure boundary sectioned the ‘inland’ from the ‘outland’. Only a gradual change where differing areas of land-use merged into others, would have been recognisable. Historically, the land between Mither Tap and the River Urie was one single cultural zone containing a wide range of interdependant and interleaved ecological resources. Only during the last two hundred years has an artificial boundary between upland and farmland zones been created. One of the witnesses of the 1738 ‘peat wars’ noted how people from the surrounding fermtouns drove their cattle to the Clackie Burn on Bennachie for pasture. David Audri’s late 12th-century view of his cattle drifting, like the ebb and flow of the tide, towards and from the skirts of Bennachie would not have seemed alien to that witness over five hundred years later. 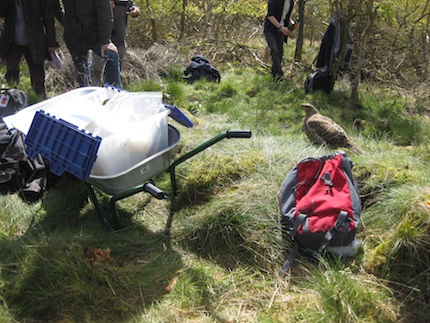 The parish of Chapel of Garioch was formerly known as the parish of Logie-Durno. This was an exceptionally large entity stretching from the boundaries of Rayne and Daviot in the north to the former parish of Fetternear in the south. The western half of the parish of Inverurie might also, conceivably, have been carved out of this early region. Stringer notes (1985, 62) that the parishes of the Garioch may well reflect former landed estates. Such pre12th-century landscapes are likely to reflect community units of great antiquity. These potentially date back to Pictish times and must be considered in relation to the chieftaindoms associated with Mither Tap and Maiden Castle (see below). The parishes surrounding Bennachie should, therefore, be viewed in terms of folk landscapes possessing a full range of ecological resources, from hill-land to river-side, essential for supporting their communities. They belong to landscape units now being seen as particularly relevant for understanding the early Medieval period in Britain. Such units are variously known as ‘multiple estates’, federal estates’ and ‘large terrains’ (Rippon, 2008, 13) though they appear to have been first noticed by Barrow in respect of the Pictish estates of Perthshire (1973).

Within the context of the modern period - post-1800 - work is starting to show the social linkages binding the new capitalised society at the local level. Intensive research into the ‘Colony’ on the eastern edge of Bennachie has been using an array of techniques to understand these networks. Excavation, soil profiling, pollen analysis, coupled with rigorous documentary detailing is casting light on the 19th- century (Foster, 2013, 39-50; Oliver et al, 2013, 103-124; Oliver, 2015, 83-98; Oliver et al, forthcoming). The ‘Colonists’ can be seen to have been occupying a particular niche within the wider socio-economic realities of this period. Their image as ‘social pariahs’ on the edge of society - both geographically and socially - can now be seen to have been a product of a minority view that gained undue credibility through time. The ‘Colonists’ were integrated within a wider society that linked their doings on the hill with those of their contemporaries in the farms below. So, although an ‘exclusion zone’ around the hill was applied by recourse to an enclosure award, wider society in the locality continued to support a range of social networks that maintained the integrity of that cultural landscape. The modern place-names scattered around the edge of Bennachie - Hillhead, Bogton, Muirtown, Newbigging, Firbogg, to name but a few - refer to the former outfields, grazing lands and upland resources utilised by the core estate centres below, such as Balquhain, Braco, Harthill and Westhall.

Documentary and landscape evidence from the 12th century, therefore, appears to demonstrate the unity of a landscape that linked the hill-land resources to the surrounding parishes lying around Bennachie. That this landscape was at times contentious and vigorously defended both on the ground and in the courts is also obvious. Attempting to pull back the veil on prehistoric periods is obviously more uncertain. But the landscape evidence that survives, such as that fossilised within the later parishes, suggests unitary social blocks spreading out from Bennachie into the surrounding countryside. The density of the Pictish place-name element ‘pit’ in the vicinity demonstrates that the native people of this area maintained their identity to a greater degree than many others in the face of a couple of centuries of centralised Gaelic linguistic ‘colonialism’ between the 9th and 11th centuries. 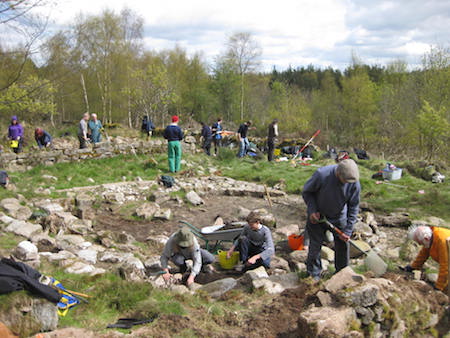 The Pictish citadel on Mither Tap appears to glower over the lands of its tribe. Suggestions link the place-name ‘-chie’ - recurrent in the vicinity - with one of the former, major chieftaindoms of Pictland. Peering beguilingly through the mists of time from the annals of early medieval Pictish king-lists, Ce was one of the first mythical rulers in the north who gave his name to one of the Pictish tribal kingdoms. This fairly typical foundation myth is, as usual, likely to contain some kernel of historical truth. Facing Mither Tap from across the Gadie Burn is the large Roman fort at Logie-Durno. Designed to hold around 24,000 men, this represents no mere ‘marching camp’ and may well have lodged the force that met the native tribes at the Battle of Mons Graupius (Mattingly, 1970, 79-90; Keillar, 2005, 57-63; Maxwell, 2007, 85). Alternative venues have been suggested but none fit the contexts as well as here. Only one further sizeable Roman fort exists north of Logie Durno, at Ythan Wells. Beyond that are mere marching camps. The battle field, were it in the locality, is likely to have been near the Gadie between the two fortifications. Recent metal detector work carried out by Aberdeen University has attempted to locate the site but, to date, with no success. However, considering that only two known battle field sites have so far been recognised from across and beyond the boundaries of the Roman Empire throughout its 800 or more years of existence, this should occasion little surprise. Even within the context of the classical world’s first century perpective from within the Roman Empire (Tacitus), the hill-lands of Bennachie were associated with its hinterland in the aftermath of this historic confrontation: “The next day revealed the effects of our victory more fully. An awful silence reigned on every hand; the hills were deserted, houses smoking in the distance...” (Mattingly, 1970, 90).

The Pictish period is further complicated by the fact that Bennachie has a second ‘fort’ on its north-eastern shoulder: Maiden Castle. Recent excavation (Cook, 2011) has shown this to have been a 7th-century chieftain’s dwelling. Its proximity to the Maiden Stone - which is of a similar vintage - suggests a cultural linkage between the two monuments. That they formed part of the same broader social network that produced the numerous Pictish stones at Inverurie and Kintore cannot be in doubt. Again, the cultural linkages across the area are apparent.

Moving still further back in time, the remarkable stone circles and henges of the area attest cultural affinities. Bennachie has its share of roundhouses on its eastern slopes and these will have contained at least some from the local populations that did whatever they did do at the earthwork and stone monuments. These littered the sides and bottoms of the Don and Urie valleys throughout the prehistoric period. Recent work by Richard Bradley at Broomend of Crichie has demonstrated the longevity of some of these monuments as well as their complicated histories. Broomend saw replanning episodes from the fourth to the second milleniums bc. (Bradley & Clarke, 2007; Discovery & Excavation in Scotland, Radiocarbon Dates, 2007, 221). It is interesting to note that, only since the ‘Enlightenmnet’ period, did these monuments fall prey to ‘improving’ farmers and landlords intent upon demonstrating their dominance of the landscape. Prior to that cartographic evidence shows how fieldscapes accommodated their presence in the landscape. The integrity of this ancient historic environment is still maintained today and has been enhanced by the partnerships that have resulted in the Bennachie Landscapes project. Much has been achieved already with the prospect of reaching a more complete understanding of the social and ecological developments of this iconic landscape still very much to be played for. Enough evidence already exists to claim the North- east corner of Bennachie from Mither Tap to beyond the River Urie as constituting a culturally unified landscape with a demonstrable folk narrative stretching back at least as far as the Pictish period.

Read more postings about Bennachie in the Save Bennachie Blog.

Please Help: If you would to contribute a blog posting please e-mail hello@savebennachie.com.